F**k space, we need weapons for a revolution!

Holy Roman Empireball, he was the

German Confederationball and later, the

German Empireball, he was known as the

Nazi Germanyball collapsed, he eventually became a state of

After millions of kebabs came into his homeland, Saxonyball decided to found PEGIDA, rebel against his own Vater änd safe Germanyball from Islamization. Yet, the other half of him is a hot bed for neo-communist politics sponsored by Die Linke which is still fiercely anti-Islam (albeit on an anti-religious rather than anti-nationalist bent), but more tolerant of helping refugees in general. Needless to say, he's a little unbalanced.

In 2016, Saxonyball teamed up together with Bautzenball many times to fight off aggressive kebabs who attacked him.

The far-right Alternative for Germany party became the second-largest as of the 2019 Landtag election with the CDU having only seven more seats than the AfD (and the strongest in any of the state legislatures) but remained in the opposition along with the leftist Die Linke party.

Vater (sometimes) - 1989 was the best day ever after fall of the Iron Curtain, but then you betrayed us all after 2015 and I want Revolution against you.

Dresdenball - together we beat our Vater and kick these invaders out.

Here's how to draw Saxonyball! 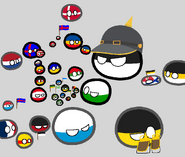 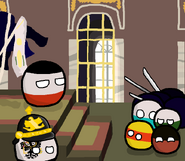