Of course Ik kann into sea! I mean, look at all meine ships und harbours und... Oh, you asked for space? I think my dad knows mehr about that.

Germanyball in northern Germany surrounded by sea and Nørdics not gibbing back Northern Schleswig.

He is member of the German Federationball since 1946.

In the north of the Eider river settled the Angleballs and south of the Eider die Saxonballs. Some of the Anglos and Saxons went over to the British Eilanden and became the Ancestors of Englandball.

Denmarkball took Sleswig for himself and left Holsten for the

Holy Roman Empire, it was split in half. But when Sleswig's ally Denmark defeated Holstens ally

Prussia in 1864 defeated Denmark, he finally could into German. Denmark got Northern Schleswig back after WWI. After losing WWII and losing Schlesien, Ostpreußen und Pommern, many refugees came in.

He was then occupied by

He was later became part of 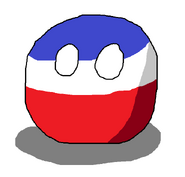