Northern Cyprusball Even though you have beaten me 6-1 in a soccer match we did, you are an unrecognized nation like me and a good friend!

My bad, abusive father that doesn't want to recognize my independence!

THOSE SHIET GERMAN NAZI GAVE A COUP D'ÉTAT IN STRONK SEALAND ALMOST KILLED ME IN THE PAST!

THIESE ADDIECTED IN MARIJUANA SUPPORTED GERMAN COUP! WILL DIE AND BE MY SLAVE!

TRIED TO RAPE ME

Being irrelevant, burning, being part of the

UKball, people not recognizing him, not getting clay, no independence

I can if I believe in myself! And I am not leaving without Sacky! (he can not into space)

The Principality of Sealand, commonly known as The Navy Guy Sealand, is a part of the UK tiny oil rig micronation. It is located on a seafort that the

British built during World War II. It is the most irrelevant micronation in the world.

He has more coastline than

Sealandball also marks as being one of the most smallest micronationballs in the world.

Despite being just a sea fort, he thinks of himself as a legitimate country. He often questions why others are afraid to recognize him. He is also kind of brave, as he fended off the attack on him made by Achenbach, and is willing to do the same to other invaders. He is also quite annoying, with his "I'm relevant" and "Recognize me" stuff, and it's often harassed by the UK because they want it back as Sealand's in the UK's waters. He doesn't see that other countries won't recognize his clay.

As a mere fort

Before Sealandball was founded, the platform he is seated on was one of several series of sea forts meant to prevent

UKball's clay. After World War 2, these platforms were abandoned and left to the elements.

Sealand was founded by a pirate radio broadcaster (

UKball was trying to prevent rock and roll from degenerating his society at that time he loves it now) trying to take advantage of the platform to broadcast banned music.

While doing so, he and his son had a run-in with the law after he tried to scare away other pirate broadcasters by shooting a few warning shots their way; drawing UKball's attention. Sealand was summoned into court over the incident and came to found out that the incident occurred outside of UKball's sovereign territory (UK claims only 3 kilometers of water away from their shores under international laws). The budding microball having won the legal war announced his sovereignty and became a microstate. He claims the UK recognizes him because of this. He does.

The little Sealand, however, was not prepared for a proper war, which soon came. Set up by a rebellious Sealand native (the prime minister), Sealand was couped by hired mercenaries from

Netherlandsball. After kicking their arses using weapons stashed on the platform, Sealand returned to normal state. Sealand kept the minister there until German diplomats negotiated for his release. He claims Germany recognizes him because of this.

Unfortunately, Sealand suffered a burning after it spontaneously burst into flames. Sealand slowly recovered, rebuilding destroyed sections of its fortress. Nowadays, Sealand enjoys fame due to its broadway play, Sealand!: The Musical (shown below), which depicted the life and hardships of Sealand, as well as it's an above-average football team. Once Alderneyball played football (soccer) with Sealandball. He also into skateboarding ramp when is bored. 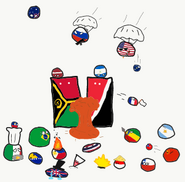 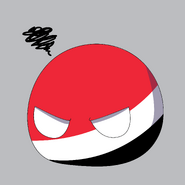 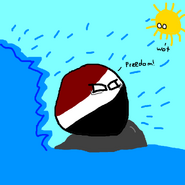 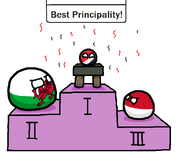 Sealand can into internet

Sealand is not gift!

Sealand, yuo are of genius!

Part 6
Add a photo to this gallery 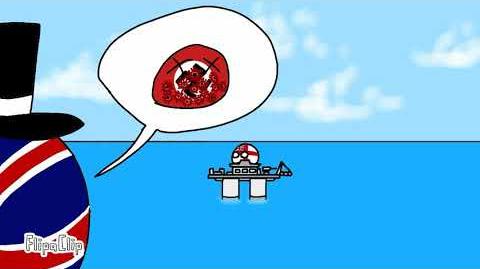 HISTORIA SEALAND COUNTRYBALLS
Add a photo to this gallery
Retrieved from "https://polandball.fandom.com/wiki/Sealandball?oldid=1262022"
Community content is available under CC-BY-SA unless otherwise noted.