Chinaball (because of World in Conflict, they invaded me!)

Unleash the Kraken in 2021!
Seattleball is the capital a cityball of

USAball. He is known for his coffee, computers, aircraft engineering, and Amazon. Seattleball recognizes it's clay is of clay stolen from

3balls in the name of

Oklahoma Cityball for stealing his basketball team, and doesn't mind it when fans of

Torontoball's Blue Jays come down from

Vancouverball for games between them and the Mariners (he and Vancouverball are good friends). He now can into hockey and will have his own team in time for the 2021-2022 NHL season known as the Seattle Kraken.

Seattleball was founded in XIX century by USAball. He is named after a 3ball chief who once led the tribes in the area.

Seattleball became into relavence in 1890's when buisness scheme to exploit gold rush pioneers bound for Yukonball was successful. Seattleball then used newfound profit to flatten hills and change rivers in terraforming project.

In 1999, Seattle protested against the WTO in the Battle of Seattle.

In 2020, he temporarily allowed an anarchist commune from his clay, called Capitol Hill Autonomous Zone (CHAZ) or Capitol Hill Organized Protest (CHOP), but USAball force him to shut it down. 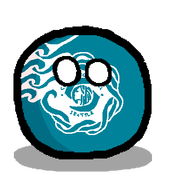 Retrieved from "https://polandball.fandom.com/wiki/Seattleball?oldid=1308631"
Community content is available under CC-BY-SA unless otherwise noted.