Only war that has on is French Intervention in Mexico

USAball. Mexicoball has internal problems with his government, because his president is a pendejo and corrupt but yet it still wants presidents to magically solve all of its problems. 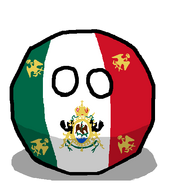 Retrieved from "https://polandball.fandom.com/wiki/Second_Mexican_Empireball?oldid=1326585"
Community content is available under CC-BY-SA unless otherwise noted.