Undeveloped civilization under no governmental protection

Stupid British old f**ker, go back or I will rape your children and call you n***a.

Father, but yuo of invade me. (sometimes)

ISIS AND AL-QAEDA WILL ACCOMPLISHINGS YUO

yuo are now ISIS will be accomplidhing you!!

I do not need your fucking "god" so stop sending preachers

Pretty much everyone, Civilization, Diseases

What is space? Can kill?

Don't follow the Indian law.
Sentineleseball are monke unsophisticated people that still live like Paleolithic times. Sentineleseball is extremely aggressive and hostile against other countryballs.

UKball has tried many times to make connections but always came back impaled with spears and arrows.

Myanmarball is scared of them. But India went to their island and gave them free coconuts in 1991. They are now hostile after what the British did to them.

Sentineleseball was born as a

After the British kidnapped some of their tribe members and tried to assimilate them, the elders died, then they let the child go back. Seeing that some of their fellow tribesmen never returned, they became aggressive to everyone trying to visit their island.

Nowadays, they will KILL EVERYTHING and EVERYONE that comes onto the islands. That results in

Indiaball not knowing much about Sentineleseball. In fact information about them is so scarce that everything we know about them came from information obtained from other countryballs, so this page symbolically does not have phrases in the first person. To this day, not much is known about them.

Once attacked a helicopter with spears and brutally killed two sleeping men on their boat, who accident drifted too close to the island's shores.

In 1981, a ship landed on the shores of their island and was attacked. The MV Primrose remains there to this day. Over time, it has visually lost shape, so it appears that Sentineleseball can into iron age

In 1991, the first peaceful contact occurred with India and the Sentinelese. India gave them some coconuts and bananas or something

missionary was killed trying to enter his island. 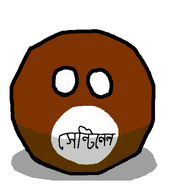 Retrieved from "https://polandball.fandom.com/wiki/Sentineleseball?oldid=1351886"
Community content is available under CC-BY-SA unless otherwise noted.