there are still more of the flag stealers....

stop with the flag stealers already for crying out loud

No, but can into scamming the other numbers

Sierra Leoneball is a Scamming numbers countryball in Africa, and is one of the infected countryballs having Ebola.

Japan thinks he is a convenience store called "FamilyMart". He is an ant by the name of Molossiaball.

He is a member of the Atlantic Congo family (West Africans). He also has the lowest life expectancy in the world at 49.7 years.

Sierra Leoneball was born as an 8ball, adopted by UKball till 1961. He went crazy in 1991 when a very violent civil war burst in his clay until 2002.

Nowadays, he is underdeveloped and suffers from extreme poverty and Ebola. In August 2017, his clay was hit by a devastating flood that killed more than 400 Sierra Leoneballs in Freetownball. 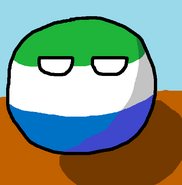 Retrieved from "https://polandball.fandom.com/wiki/Sierra_Leoneball?oldid=1303066"
Community content is available under CC-BY-SA unless otherwise noted.