I Will save my Children

Ogadean is mine you evil latino

NOT A REAL COUNTRY

Why you rigged djiboutis vote?

was rocket buddy but sided with Dergball

That traitor that helped killed me

NOW SOMALIA IS A SHITHOLE BECAUSE OF THE CLIONTON TRAITOR!!

I WILL GET YOU EVIL BURGER AND RAW MEAT EATING RAT!!
Somali Democratic Republicball was a Communist Pirate dictatorship countryball in Africa.

Somaliaball was born as an 8ball, adopted by Kingdom of Italyball as Italian Somalilandball, then Italian East Africaball. After UKball occupation from 1941 to 1950 and Italyball trusteeship from 1950 to 1960, he became independent. In 1969 he passed through a socialist phase which lasted twenty-two years. In those twenty-two years he fixated on the idea of a Greater Somalia, which meant the occupation of the Ogadenball, Djiboutiball, and Northeastern Province of Kenyaball, which led to the Ogaden War with Dergball in which he got support from the Chinaball, SR Romaniaball and USAball. After he was defeated and humiliated, he began to become into a paranoid and arrested officials, which then led to an end in the Somali Civil War. 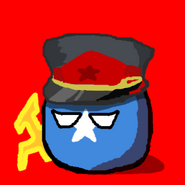 By u/thebigbosshimself
Add a photo to this gallery

Retrieved from "https://polandball.fandom.com/wiki/Somali_Democratic_Republicball?oldid=1313076"
Community content is available under CC-BY-SA unless otherwise noted.