Dad That gave me no monies!

It was a state located in West Africa. From the beginning of the 15th century until the end of the 16th century, Songhai was one of the largest

Islamic empires in history (also one of the largest

8ball Empires). This empire bore the name of its main ethnic group, the Songhais. Its capital was the city of Gao, where a Songhai state had existed since the 11th century. Its power base was located on the banks of the Niger River, in today's

The Songhai state existed in one way or another for more than a thousand years if the history of its rulers is traced from the first settlement in Gao to its semi-vassal status under the Mali Empire and until its continuation in Nigerball as the Dendi Kingdom.

It is thought that the Songhaiball settled in Gao as early as 800 BC, but did not establish it as the capital until the 11th century, during the reign of Dia Kossoi. However, the Dia dynasty soon gave way to the Sonni, which led to the rise of Sulaiman-Mar, who gained independence and hegemony over the city. It is usually credited to Mar with wresting the power of the Mali Empire and having achieved independence for the small Songhai kingdom of the time.

The territory of the Songhai Empire under Achsa, conquered "by fire and sword", stretched westward to the Atlantic Ocean, northwest of the Tagaza salt mines (on the northern border of Maliball), southwest as far as Bendugu (Segu), southeast to Bussa and northeast to Agadez. In addition, as a result of its wars, it obtained vast taxable territories and control of the main routes of the Transaharan trade, allowing the prosperity of the Songhai Empire in the sixteenth century. 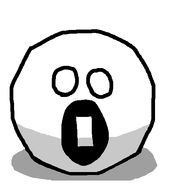 Retrieved from "https://polandball.fandom.com/wiki/Songhaiball?oldid=1309688"
Community content is available under CC-BY-SA unless otherwise noted.