Serbiaball (wants to remove me because he thinks I'm Kebab)

Hurricanes, Cyclones, Tornadoes, Dylann Roof, People calling me kebab, General Sherman (He burned me down during the war!)

We are praying for the two news people killed in Greenvilleball, and were also going to be evacuating because of Hurricane Florence.
South Carolinaball is a racist kebab stateball in the southeastern

USAball. He is neighbored to the north by

North Carolinaball (worse Carolina) to the south and west by

Georgiaball  across the Savannah River, and to the east by the Atlantic Ocean.

USAball, is one of the states with the highest number of

8balls. These 8balls are descendants of slaves that came from countryballs like

South Carolina often describes himself as "best Carolina", and can into tourism. South Carolinaball also has a somewhat redneck personality and a presence of racism. He is also sorta irrelevant, until 2014, where his capital, Columbiaball sparked a nationwide controversy regarding the flag of

CSAball, which he used to be a state of, during the American Civil War.

South Carolina wears a flag consisting of a oxford blue field, centered with a palmetto tree and a crescent moon on the top left, the latter being unrelated to Islam, but others don't believe that. His favorite palmetto tree represents the logs of trees that protected Fort Moultrie in the Revolutionary War. The cannonballs from a British warship bounced off the logs lining the fort. 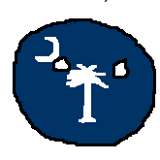 Retrieved from "https://polandball.fandom.com/wiki/South_Carolinaball?oldid=1333334"
Community content is available under CC-BY-SA unless otherwise noted.