On April 25th, 1950, South Maluku, or better known as Republik Maluku Selatan (RMS), declared his independence from Dutch East Indiesball. But soon Indonesiaball refuses this declaration and tried to anschluss him. The main stronghold was defeated by Indonesian forces in November 1950, but small guerilla struggle continued until 1962. This defeat resulted in the formation of the government in exile in the Netherlands. Today's, his clay is part of Indonesiaball although (RMS) considered dissolved, in reality he still exists in the Netherlands and tries to reconquest his homeland from Indonesiaball. 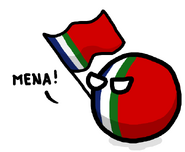 South Malukuball hold his flag
Add a photo to this gallery

Retrieved from "https://polandball.fandom.com/wiki/South_Malukuball?oldid=1309185"
Community content is available under CC-BY-SA unless otherwise noted.