Oooh, I got guts, recognizing both Israel and Palestine....

Arab countryballs or any type of allies of USAball because Russia is always watching especially:

OH CRAP RUSSIA IS WATCHING ME

FLAG STEALER!!! AND TRAITOR (he refused to hand Ilemi Triangleball into me!)

Pieace of famanized crap that dosen't recognize me

BIGGEST LIAR AND TRAITOR EVER (Please don't leave me...)

LOL I withdrew my recognition

Abyeiball (ALSO TRAITOR!!! Plox come back to me...)

Himself, freedom, oil, getting aid,

No, cannot into safe country yet!

Got first case of COVID-19. And according to estimates has about 2,000 cases.

South Sudanball is a countryball in Africa. He separated from

South Sudanball doesn't have much pre-colonial history. He was born as an

8ball. It has been owned by several African kingdoms until eventually falling into the hands of

When Sudanball gained independence in 1956, South Sudanball was not happy that he was a part of him one bit. Soon, the First Sudanese Civil War broke out, and in 1972, the Southern Autonomous Republic of Sudanball was created. It lasted until 1983 until the Second Civil War broke out. It ended in 2005 when South Sudanball gained complete self-governance. It got independence in 2011 after a referendum, making it the youngest countryball to be a member of

UNball. Just two years after independence, it fell into a civil war, But it actually ended in February 2020, Now South Sudan has to increase its economy after the war aggression happened or else South Sudan would collapse.

As all African countryballs, South Sudanball, isn't doing the best when it comes to economy. Its total GDP is $21.3 billion, putting him behind

Burundiball in this term. The average GDP per capita is $1.978. The main export of South Sudanball is, of course, oil! USAball to liberate him He does genuinely wish

USAball could buy his oil, but his

Khartoumball demands a share of the profits from South Sudan’s oil conducts, USAballs oil company’s have no presence in his oil industry.

Like every other African country, the largest employer is agriculture, with cattle ranching being the primary economic activity. But of course the sector is very underdeveloped and needs work, which is probably not gonna happen because of the war aggression and corruption.

Half of the people that live in South Sudanball live below the poverty line. In terms of HDI, he is estimated to be 169th out of 188 nations, putting him in the low development category. However, we will never truly know... NO DATA.

Because of scarcity of data, we can only estimate most demographic indicators for South Sudan. 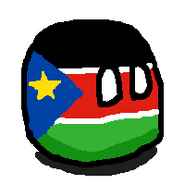 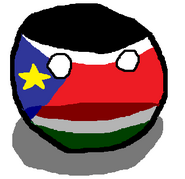 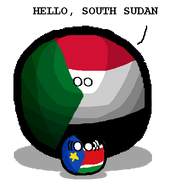 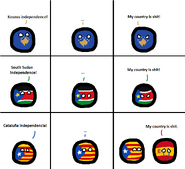 Potential Newcomer (AlolanVulpix_)
Add a photo to this gallery

Retrieved from "https://polandball.fandom.com/wiki/South_Sudanball?oldid=1261743"
Community content is available under CC-BY-SA unless otherwise noted.