No, but was so close

South Vietnamball, officially the Republic of Vietnamball, is a people group in Californiaball. Formerly an independent countryball, he governed the southern half of Vietnamball from 1955-1975. His capital at the time was Saigonball.

Under Catholic dictatorial president Ngô Đình Diệm, there was a flaming hot Buddhist monks protested against his Catholic bias policies.

Since president Diệm was so unpopular, he was removed in 1963 and replaced by several South Vietnamese generals until 1967 when the election was held and Nguyễn Văn Thiệu became president.

Both Vietnamballs share the same the noble blood of ancient Dragon clan, and the same epic history.

Both South and North Vietnamball were the result of "The Geneva Conference", while

So when the Communist force took over the North Vietnam, in 1955, a referendum was held and

the Republic of Vietnamball was created, to stop

Japan, he became emo and autism, and with the stupid congress, USA doesn't want to help

South Vietnamball remove commie any more. USA also became politically disinterested due to unrest from hippies and due to a lack of monies due to the OPEC oil embargo. This time, South Vietnamball have to take care for himself, fighting with

Finally,after the Fall of Saigon, South Vietnamball had to escape from his own country, to sail through the big ocean, hatefully lookback at Saigon, where he grew up, and some time on his boat, he dreams about the day he come back to retake what he lost!

Aside from war stuff, South Vietnamball is still alive as Little Saigonball. Today you can find him in USAball (mostly in Californiaball and Texasball) with some descendants in Australiaball and some western countries. His descendants use his symbol to not only represent their heritage but also to distance themselves from the current regime, lifestyle, and culture of VNball. South Vietnamball's variant of the Vietnamese language is often more formal than Vietnamball's and he often critizes Vietnamball for bastardizing the language and making it way too slangy and informal. Because of decades of seperation from Vietnamball, it's becoming more diffcult for him to understand Vietnamball due to these language changes. 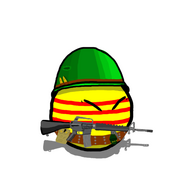 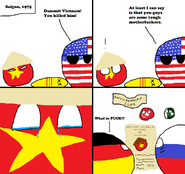 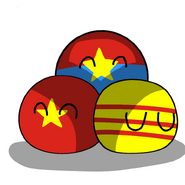 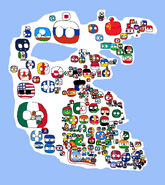 Retrieved from "https://polandball.fandom.com/wiki/South_Vietnamball?oldid=1346889"
Community content is available under CC-BY-SA unless otherwise noted.