Sovietball
other Arab and socialist states

I shall live again!

Influenced by the 26 September revolution of

North Yemenball, in 1963 some young Marxist and nationalist

Federation of South Arabiaball. After four years of fighting they earned independence and proclaimed a sovereign people's republic in 1967, made a socialist state under the Yemeni Socialist Party in 1969. South Yemenball clashed with North Yemenball at the border in 1972, but the two agreed to unify in the future. Around the time the Soviet Unionball was falling they were merged back into Yemenball. Those opposed to unification attempted to recreate South Yemenball as Democratic Republic of Yemenball in the Yemeni Civil War (1994). Nowadays, its a separatist region of Yemenball seeking independence again in the Yemeni Civil War (2015-present). 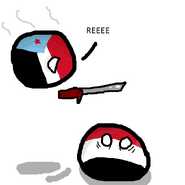 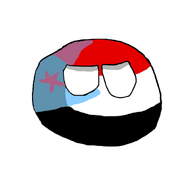 Retrieved from "https://polandball.fandom.com/wiki/South_Yemenball?oldid=1287414"
Community content is available under CC-BY-SA unless otherwise noted.