State of the Teutonic Orderball

Currently works as a religious

German knights during the

Northern Crusades against the Romuva pagans. He was removed by

Grand Duchy of Lithuaniaball and

The Teutonic Order itself was an order of charity workers turned crusading knights which participated in several crusades. However, they did not hold territory until after the Third Crusade when they were granted land in Europe.

The State of the Teutonic Orderball was born when the Third Crusade ended. It was a little settlement of a few knights in what was

After the Third Crusade, it gained land and the Teutonic knights went around Europe converting Pagans to Christianity in what is commonly known as the German crusade.

Teutonic Orderball expanded and later became the Duchy of Prussiaball when the theocratic parts of the government were abandoned in favour of a secular duchy. However, the Order continued to exist as a charitable and ceremonial body. It was outlawed by

Nazi Germanyball in 1938, but re-established in 1945. Today it operates primarily with charitable aims in Central Europe. The Knights wore white surcoats with a black cross.

It is often believed Teutonic knights were the first to use the hussars, later used by 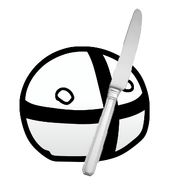 By u/selenocystein
Add a photo to this gallery

Retrieved from "https://polandball.fandom.com/wiki/State_of_the_Teutonic_Orderball?oldid=1318243"
Community content is available under CC-BY-SA unless otherwise noted.