Germanic (in his dreams)

I WANT INDEPENDENCE NOW!!!
Sulball is a separatist macroregion of

Brazilball. He was created in 1992, even though Rio Grande do Sul has already been a republic for a time. The campaign has started in Laguna, a place in Santa Catarina but meanwhile he is little (and probaly will be little forever). 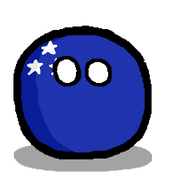 Retrieved from "https://polandball.fandom.com/wiki/Sulball?oldid=1311799"
Community content is available under CC-BY-SA unless otherwise noted.