Awesome, relevant (in the reality, he is irrelevant)

Too irrelevent to has enemies

Being a sheriff, Solving crime

too much jungle, crabs

No, not even relevance

Roti, bara, broodje pom, Fernandes
Surinameball has a surname is a countryball in northern South America. He is the only country in South America to have Dutch as an official language.

It was colonized by the

Netherlandsball until 1975. Now he is of dutch and irrelevant. Just like

Guyanaball, he has a large Indian (South Asian) population. He cannot into space.

Sheriff Suriname is a Polandball comic series, created by /u/FVBLT in 2014 on the subreddit /r/Polandball. It has a devout follower base in several different Polandball communities.

Sheriff Suriname follows Surinameball as a sheriff, solving cases in the style of a 80s cop movie. His frequent contractor is Chinaball. 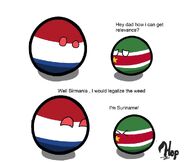 How Suriname got relevant 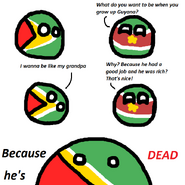 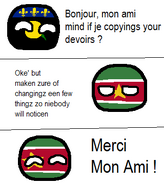 Retrieved from "https://polandball.fandom.com/wiki/Surinameball?oldid=1265630"
Community content is available under CC-BY-SA unless otherwise noted.