no, but I can into seed

i is not a popular countryball
Svalbardball is an archipelago located north of Europe within the Arctic Ocean. He is a

He can be found slightly north of

Russiaball. Svalbard is a really good friend of

Jan Mayenball and loves to eat whales. He can also into the Global Svalbard Seed Vault.

Priests discovered Svalbard as early as the 12th century. There is a traditional Norse account of the so-called Svalbard realm. This "cool coast" -although this may be called Jan, or part of eastern Greenland.

1. Draw a Nordic cross flag with the colors mentioned in Flag Colors

2. Draw a polar bear in the Northwest division

3. Draw the eyes and you're finished!

Please note that the flag is fictional and can be found in Uncyclopedia. 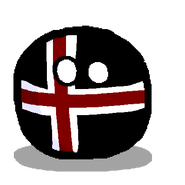 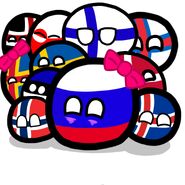 Retrieved from "https://polandball.fandom.com/wiki/Svalbardball?oldid=1346391"
Community content is available under CC-BY-SA unless otherwise noted.