Special Administrative Region of the People's Republic of China (non-existent)

Taiwan SARball is a hypothetical Taiwanball controlled by Chinaball as a special administrative region after Taiwan became under its Labor Party rule. Taiwan SARball is bordered by the ROC (Taiwan) to the south, meaning that he only occupies the northern part of it.

In a different alternate universe, Taiwanball managed to join UNball and became the Republic of Taiwanball. 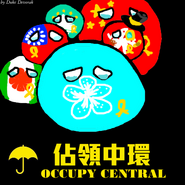 Retrieved from "https://polandball.fandom.com/wiki/Taiwan_SARball?oldid=1312013"
Community content is available under CC-BY-SA unless otherwise noted.