Nice, likes to work, capitalist. Easygoing but also wishes it was in the UN. weeaboo and furry as well as fake

claimed by Chinaball, but recognized by few countries

THE MAIN THREAT OF PEACE!

The guy who Banned me in Asian Games 1962

Shqip mainland lovers, not being recognized by other countries as an independent country the

Republic of Taiwanball(Pan-Green Coalition)/not being recognized by other countries as the true China (Pan-Blue Coalition), Simplified Chinese script, earthquakes, being turned down by the f*cking United Nations,

Of course! Almost all times!

Is either to become the

the new legitimate Nationalist Chinaball, or the

Taiwan SARball Also about to be hit by a Typhoon. most likely will get anschlussed

First to legalize gay marriage in East Asia!
REMOVE CHINABALL AND SHQIP FROM THE PREMISES!

Taiwanball, also known as real china the Republic of Chinaball aka the Republic of Formosaball, is a countryball that lives in East Asia in the western Pacific Ocean, occupying the island of Taiwan. To their north across the Taiwan strait lies

Chinaball, their big brother who constantly wants to Anschluss reunify with Taiwanball. To the west across the South China Sea lies

Vietnamball. To their north and east across the East China Sea lies

Japanball. To their south across the Luzon Strait lies

Philippinesball. The country is divided into 6 special municipalities, 3 provincial cities, and 13 counties, including their capital

Taipeiball being one of the municipalities located in the North, giving them a total area of 13,976 square miles, making them the 136 largest sort-of countries in the world. As of 2018, Taiwanball maintains a population of about 23.58 million inhabitants.

Due to not being a fully recognized country, Taiwan is unable to into any sort of international organizations. Taiwanball was temporarily a part of the

UN, but after their

Like all other East Asian balls, Taiwanball is descended from

1ball, and from other Chinese Dynastyballs and some Taiwanese natives. In the 1500s, Taiwanball was given the name “Ilha Formosa” or “Beautiful Island” by

Spanish Empireball occupied some of his modern clay.

Mingball came and occupied Taiwanball, which then was kicked out by

In 1895, Taiwanball was occupied and annexed by

the Empire of Japanball. He spent the next 50 years with him, and many other balls such as his sex slave (aka 'comfort woman')

Republic of Chinaball was born after killing

People's Republic of Chinaball soon killed him and took over most of their father's clay. He was forced to flee to the island of Taiwanball in 1949.

The military leader Chiang Kai-shek ruled Taiwanball as the President of the Republic of China from March 1, 1950, till April 5, 1975.

In the 1980s to early 1990s, Taiwanball transitioned from a one-party military dictatorship to a multi-party democracy with a semi-presidential system. This makes it very different from the one-party communist dictatorship on mainland

both speak Mandarin, but Taiwanball uses traditional Chinese characters for writing, whereas

In 2015, a poll conducted by the Taiwan Braintrust showed that about 90 percent of the population would identify themselves as Taiwanese rather than Chinese if they were to choose between the two. Around 56% would rather remain as they currently are, 31% would like to separate with

Chinaball. The rest did not answer.

USAball and other allies. This means if

Most other countryballs don't want to recognize Taiwanball as an independent countryball, because they're afraid of upsetting

Chinaball and their economic interests.

Taiwanball is waiting until the

Communist Party of China loses power in mainland Chinaball. Then it can declare independence as the

Republic of Taiwanball, or restore a new legitimate

Republic of Chinaball, but it probably will never happen.

When Taiwanball competes in international sports events, he does it under the name

In 2020, the independence president Tsai Ing-wen of the pro-independence party DPP was elected with a great majority.

Asia and the Middle East

Central America and the Caribbean 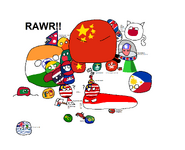 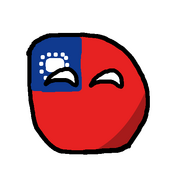 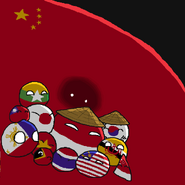 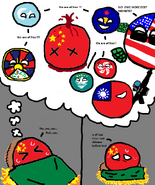 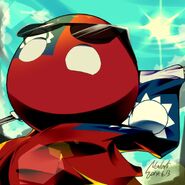 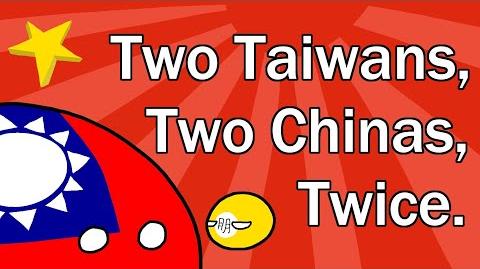 Two Taiwans, Two Chinas, Twice
Made by brain4breakfast
Add a photo to this gallery

Retrieved from "https://polandball.fandom.com/wiki/Taiwanball?oldid=1148601"
Community content is available under CC-BY-SA unless otherwise noted.