Fulinball: You are good at treating the sick. There are other civilizations just like me! You are good at healing people from brain parasites... I'm not...(Feels inferiority complex)

countries who refuse to pay tribute

Very possible that could've, but was gone long before he could
Tangball, also called the Tang Dynastyball or Tang Empireball was a historical countryball representing the Tang Dynasty of

He was of very stronk and glorious

China, he can into many land, including Mongol clay. He also can into silk, paper, art, poems and monies, while the Europeans cannot into stability after the breakup of

SPQRball. Tangball can so glorious Chinatown in Chinese is literally translated into (Street of the Tang people/唐人街).

He was briefly interrupted by Second Zhouballl, caused by the ascension of Wu Zetian to the throne of China.

In 751, he was defeated by Abbasidball. He then had a rebellion against him in 756. Tangball would never recover from these events. Gokturks became independent, and he lost his route to Central Asia. He also has an interest in cannibalism. 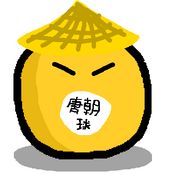 By u/iambatpenguin
Add a photo to this gallery

Retrieved from "https://polandball.fandom.com/wiki/Tangball?oldid=1298879"
Community content is available under CC-BY-SA unless otherwise noted.