Guy who Taught me how to fight. (sometimes)

HOW IS HE MY FATHER (eventually)

No taxation without representation!

The Thirteen Coloniesball is the faithful elder son of

USAball in his childhood and teenager years. It is now New Englandball.

The Thirteen Coloniesball is often portrayed as loyal to the

crown, but interested in liberty and freedom from the crown in the style of an innocent child.  Later he became a rebellious teenager that have problems of relationship with his father

UKball. Now in his adulthood, he is

USAball and has no more problems with his father, and even helped him in the world wars.

Thirteen Coloniesball was first settled in 1607 by Settlers in

UKball's oldest son's. TC also had a weird habit of making tea out of ocean water... Then a revolution started (revolutionary war) against UKball and then

Franceball joined in. He is now known as 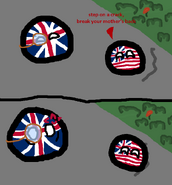 By u/Lucky_Numbr_7
Add a photo to this gallery

History of the United States of America - Countryball version -Finished 2015-
Add a photo to this gallery
Retrieved from "https://polandball.fandom.com/wiki/Thirteen_Coloniesball?oldid=1333687"
Community content is available under CC-BY-SA unless otherwise noted.