Abiy Ahmed can rot in hell

Mind your own dam buisness

Same with UAE
Tigrayball is the northern most region of

Eritreaball. He is not a psychopath, but he likes to remove kebab.

Currently, Tigrayball is in war with Ethiopiaball from warlords and territorial disputes from the territory from them and Amhara. This is known as the Tigray Military Intervention. He is in war against Amharaball

Tigrayball was born as a

Israelcube) which regions back to 2000 bc. They have manuscripts placed as the Cosmas Indicoplestes, when its clay was adopted by

Kingdom of Aksumball took over Tigrays clay. Tigray was fought for during the Arab invasion and occupied Tigray among with current Eritreaball during the war untill the Aksumites took it back. The Arabs ended up successfully invading modern day

Yemenball but not Eritrea nor Tigray.

Tigrayball was then of course taken by both the

Abyssiniaball. The crusades against the

Ottomans and Adal was fought against the already claimed clay by Ethiopia. Of course Ethiopia won agianst the Ottomans. The third and final invasion of 1867 from Egypt Eyaletball against Abyssinia was also taken place in Tigrays clay. Abyssinia won again as usual and this is how Tigray becomes a kebab remover, having less then 5% of thier population being islamic.

UKball withdrew from it after previously intervening in Ethiopia to overthrow Emperor Tewodros II. With British weapons, Kassa Mercha of Tigray became Emperor Yohannes IV and ruled Ethiopia from 11 July 1871 to 10 March 1889. He was killed in war against Mahdist Sudanball, but his successor Ras Mengesha of Tigray didn't become the next emperor as Negus Menelik of Shewa sieged it and was recognized as such. Ras Mengesha even having a strong rivalry with Menelik refused to cooperate with

Abyssiniaball, saying nothing was more important than the independence of Ethiopia.

In the 20th Century, relations between Shewa Amharas and Tigrayans deteriorated again as they sided with Lij Iyasu, the opponent of later Emperor Haile Selassie, who mistreated them out of that. During the 30s, some years before WW2, Italians occupied Tigray and try to combine it with Italian Eritreaball to unite the Tigary people and eventually unite all the horners with Italian East Africaball in order to siege Ethiopia. When the

British liberated Abyssinia, Tigrinyan-speaking people were widely referred as bandas (Italian collaborationists) in cycles around the Emperor because of the actions of some of their nobles. Provincial ruling elites in the Tigray ended up losing most of their power later and they started to revolt against the monarchy one more time.

Following the communist revolution and the fall of the monarchy, Dergball was born. The rebel tendencies among the Tigray people initially decreased as the communists had a reconciliationist speech toward the different peoples of Ethiopia, abolishing race and class-based privileges that existed in the previous regime. However, as internal conflicts started to appear in the Derg, so did the rebel tendencies one more time, they gained relevance once more after Aman Andom (who was a Tigray himself) lost the dispute and ended up killed.

Tigray nationalists decided to follow the pro-PSR Albaniaball (Hoxhaist) wing of the opposition against Dergball, that taking place in an intra-socialist conflict regarding Albania and the Soviet Unionball, in which the Derg was allied with the Soviets. The Tigray People's Liberation Front (more commonly known in Ethiopia as the Woyane) was founded in 1975, and used to be dominated by the Marxist–Leninist League of Tigray, that together with other Hoxhaist organizations in Ethiopia opposed the Derg, however, their agenda became a separatist one.

As the conflicts in Ethiopia got more fierce and started to gain international relevance, Western countries such as the

USAball started to turn their eyes into Ethiopia. It was in this period that the Tigray nationalists started to develop relations with them, as allying with the West could provide everything Albania couldn't, their allegiance to Hoxhaism ended up being just rhetorical as part of previous events in Derg politics.

When the Ethiopian Civil War ended, Tigary didn't become its own country because they were the dominant ethnic groups in the EPRDF (Ethiopian People's Revolutionary Democratic Front), the united coalition that had fought against Dergball. Different from Eritreaball that went on to become its own thing, the Tigrays started to dominate Ethiopian politics. The conflicts between the TPLF that ruled Ethiopia and Eritrea had origins in this period. A controversial "ethnic federalist" system was formed by the EPRDF, where the Tigrays with their TPLF were the ruling power and acted as their own country inside of Ethiopia, while other regions such as the Somali one had almost no autonomy.

Things changed in Tigray after the death of dictator Meles Zenawi, the architect behind ethnic federalism, with the TPLF finally losing their federal power in 2018 when Abiy Ahmed became the prime minister. Under Abiy, the federal rhetoric started to be downplayed and the idea of a more unitary Ethiopia started to be pushed. Since this, Tigray under the TPLF started to disagree with the government over everything and refused to recognize the new government. As the differences couldn't be solved politically, it looked like a powder keg that would explode anytime.

Then, in November 2020, when border disputes between the Ethiopian army in

Amharaball and the Tigray started. The situation finally reached its peak and the government launched a military intervention against the TPLF. 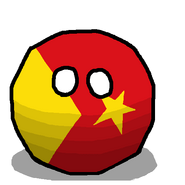 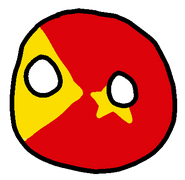 Retrieved from "https://polandball.fandom.com/wiki/Tigrayball?oldid=1320479"
Community content is available under CC-BY-SA unless otherwise noted.