Everything you find there

Burkina Fasoball. Like his neighbours, he cannot into much relevance.

He is a member of the Atlantic-Congo family (AKA West Africans).

He has a movie dedicated to him.

He participated in the 2018 Pyeongchang Winter Olympics

Togoball is descended from West African

8balls, as are all his brothers. He became known as Togolandball in 1884, after

German Empireball (Or Reichtangle if on Facebook Polandball) captured him during the Scramble for Africa. After

German Empireball was defeated and killed during the Great War,

Franceball in 1921. He was finally given independence in 1960, whereupon he became even less relevant than before. It is said that Togoball lost his eye in a fight over some clay with

Beninball. No one knows who won the fight, except for

Nigeriaball who charges to tell the story. 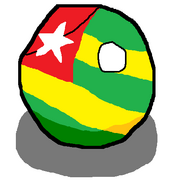 Retrieved from "https://polandball.fandom.com/wiki/Togoball?oldid=1253988"
Community content is available under CC-BY-SA unless otherwise noted.