No because spaceship is not can into existence yet

Tokugawaball, officially the Tokugawa Shogunateball was the last shogunate of

Feudal Japanball. The Shogun were military dictators with near-absolute power. Tokugawaball was the de facto ruler of all of ancient

Japanball islands from 1603, after the death of dear

Toyotomi Clanball a few years later, to 1867. After that, he became the

Japanese Empireball. He was given the title of Shogunate by the Emperor who was only nominally above the Shogun. Since Japan was ruled by Shogun with a warrior class from 1192 to 1868 CE which a civil war occurred in which it lost to

Empire of Japanball, and briefly existed as Ezoball at the end of the war.

Ryukyu Kingdomball and before that wanted to invade

He was very suspicious of foreigners. Such as

USAball. He distrusted and hated Christians.

Tokugawa loves all things like samurai. He usually wears a katana (Japanese sword). He is very militaristic, leads big feudal armies, and acts like a warrior. He is brave and lives according to the ancient Bushido, the virtues of the way of the warrior. 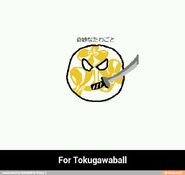 An alternate or earlier Tokugawaball based off his crest.

Retrieved from "https://polandball.fandom.com/wiki/Tokugawaball?oldid=1283407"
Community content is available under CC-BY-SA unless otherwise noted.