FAK YUO YUO OF STARTINGS MYANMAR PROTEST IN MY CLAY

A protest happened in my cray recentry...

Japanball. Tokyo means "Eastern capital" in Japanese. He is the most populated metropolitan area in the world with over 38 million people (Greater Tokyoball Area). About 13.9 million people live in the metropolis alone. It is mostly a concrete jungle with many big and tall buildings. However, there are also several big parks with nature.

New York Cityball has a population of 8.4 million (2018). If you only count the metropolis,

Shanghaiball is larger than him, and Chongqingball would be the largest cityball in the world.

Can into two baseball teams: the Yomiuri Giants and the Tokyo Yakult Swallows.

Tokyoball was born as a little fishing village called Edo in 1457 CE. Since 1603, it has been the de facto capital of

Tokugawaball Shogun (military dictator) lived there. In 1868 the Emperor of Japan regained control of the country so he moved the capital from

Kyotoball to Edo and renamed it Tokyo.

Burmese community started a protest against the Myanmar coup, with over 4,000 people attending the protest, making it the largest protest in 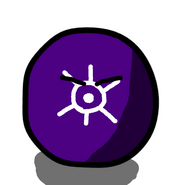 Retrieved from "https://polandball.fandom.com/wiki/Tokyoball?oldid=1296866"
Community content is available under CC-BY-SA unless otherwise noted.