Been Mistaken as an Aborigine

Alive
Torres Strait Islanderball are Indigenous Australians living on an island near the Cape York Peninsula,

Australian Aboriginalsball they always existed. It was discovered by Portuguese sailors, Until they were annexed by 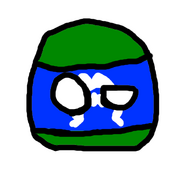 Retrieved from "https://polandball.fandom.com/wiki/Torres_Strait_Islandsball?oldid=1264187"
Community content is available under CC-BY-SA unless otherwise noted.