Russia became independent after Ivan III fought against the Golden Hordeball. Ivan IV the Terrible reigned from 1533-1584 and made the nation powerful by conquering Novgorod and installing secret police and killing its people. In 1601, there was a massive famine and the time of the troubles began. It ended with the Tsardom of Russiaball giving Polish-Lithuanian Commonwealthball some land and Mikhail Romanov took over the Russian throne. Then, in 1689 the ambitious Peter the Great started rule of the nation, and defeated the Swedish Empireball in the Great Northern War, which started in 1700.

soon and a half 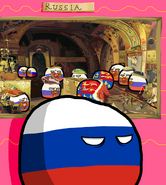 Retrieved from "https://polandball.fandom.com/wiki/Tsardom_of_Russiaball?oldid=1322125"
Community content is available under CC-BY-SA unless otherwise noted.