No... but can into lowest GDP!

UN yet to fix global warming! I blame china and 'murica!

Tuvaluball or Elice Islandsball or Tuvaball is a countryball in Oceania, it is made up of 3 reef islands and 6 normal islands. It is the world's 4th smallest countryball and it only has an internet domain (.tv). He can into very invisible. If you want to visit his clay, do it now, because he’s screwed and will completely become one with the sea in a few years

7ball, was adopted by

Tuvaluball also owns the internet domain ".tv" which gives him a large percent of his money, but has a little economy based on the export of cocos to other isles and to

Tuvalu was first discovered by Spanish explorers on 16 January 1568 during the voyage to Nuie. The explorers gave the name "Valu del Jesus" meaning "Islets of Jesus" because the day of discovery was Easter.

Kiribati came to colonize the island and killed native islanders,

Spanish people. The native islanders surrender, but the Spanish government doesn't. This creates a dispute

During the Brit-Spanish dispute, a lot of Natives were used as soldiers or slaves so a revolution happened occurred. In the end, the three sides decided to make peace and make it British Commonwealth, Tuvaluan Rule, and Brit-Spanish name -Tu meaning Transitive Un-Partisan and Valu for island in Spanish.

Global warming caused Tuvalu to be 86% flooded and soon he will drown. 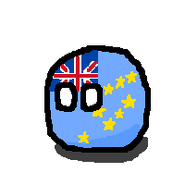 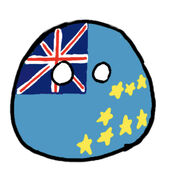 Retrieved from "https://polandball.fandom.com/wiki/Tuvaluball?oldid=1256531"
Community content is available under CC-BY-SA unless otherwise noted.