The Union of South Africaball was killing 8balls a racist countryball in Africa. It was a

British dominionball created by the combination of the British Transvaalball, British Orangeball, Colony of Natalball, Cape Colonyball. They became an independent republic in 1961 following a referendum, and a democracy in 1994 after the first multi-racial elections were held which marked the official end of apartheid.

Dutch Republicball during the 17th century to get a trading post to trade with India. It became so

British Empireball would have like to own this territory and so started colonize here too, founding

Cape Colonyball, to get a way to somehow steal this region from

Dutch Empireball. When the Napoleonic Wars broke out,

Batavian Republicball). In this way,

British Empireball got the region from

Batavian Republicball. But traces of the

Dutch colonization are still present in the territory.

Colony of Natalball, were incorporated into a

Union of South Africaball. The Boer Wars costed to the

British colonizers a lot in lives and money but it got a big result.

In 1910, the Union of South Africaball officially became a dominion of

British Empireball and helped its overlord during World War I and World War II. But Union of South Africaball was never too keen on

ooga boogas and so, in 1949, the government started an infamous policy for "keep the races separated": Whites have to be in places for Whites (which means rich and developed places) and

Blacks in places for

This policy lasted also when in 1961 the Union of South Africaball became a republic and in 1961 got out of Commonwealthball. It was thanks to Nelson Mandela, a

Black revolutionary, that the policy finally stopped and the apartheid officially ended. 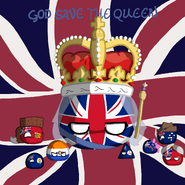 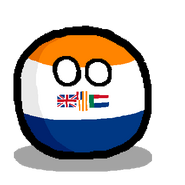 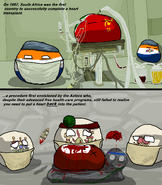 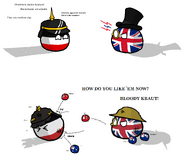 Add a photo to this gallery
Retrieved from "https://polandball.fandom.com/wiki/Union_of_South_Africaball?oldid=1255558"
Community content is available under CC-BY-SA unless otherwise noted.