My friend who says i'm the best

Currently exists as Unifed Korean teams for the 2020 Summer Olympics In Tokyo.

Unified Koreaball , or just Koreaball , is a proposed future country that would be born from

South Koreaball uniting. In reality, he would be the

True Koreaball (without joke), his soul and body is just divided in two versions of himself and according to the "scientist"

Koreaballs want to reunite become this country again, but they disagree on many things, so they cannot into unification for now.

North Koreaball won't last more than 20 years, so they can be joined soon. The ways in which this could happen are many, with

South Koreaball, but obviously this would not last long, as

South Koreaball has many strong supporters. The most likely way, however, would be if the Korean War started again (since both Koreas have possibly agreed to end the conflict in 2018), in which

North Koreaball's clay would be given to

North Koreaball's clay. In 2018, the two presidents of

North Koreaball met, and this could end with a

United Korea, however this is quite unlikely. 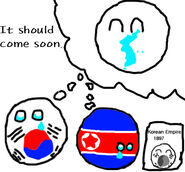 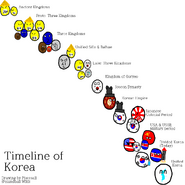 Retrieved from "https://polandball.fandom.com/wiki/United_Koreaball?oldid=1280727"
Community content is available under CC-BY-SA unless otherwise noted.