Colonialism
The United Provinces of Rio de la Plataball was a countryball in South America. He is

Argentinaball in his college years.

​ Señorito Ingles was defeated by civilians failed in both attempts, during the invasion the viceroyalty suffered double personality disorder on ​

​ Spanish Buenos Aires, this is known as the birth of Argentina, not as a political entity, but as a rebeld new personality inside ​

Napoleon, and fought against the ​

​ Portuguese Brazilball while doing so) and became ​

The conflict between the unitaries and federals started when  ​​​​​​

​ Banda Orientalball rebeled against the ​

​ United Provinces due to political differences, becoming the ​

​ League of the Free Peoplesball.

During the fight between the ​

​ CABAball, a thing that made all the provinces autonomous.

​ Argentina as a country, being the first one to do it. On the same year ​

​ Montereyball  and helped on the liberation of Central America in 1819, and due to this, most central american countryballs made their flag similar to ​

​ Buenos Airesball started to act like the boss of the other provinces, so in protest ​

​ Tucuman was divided into ​

​ Entre Riosball was separated from ​

​ Viceroyalty of Peruball, marking the end of Spanish colonialism in South America.

​The Brazilian Empire (that got help from ​

​ Prussian mercenaries) fought for the territory of ​

​ Argentina was gaining terrain, but ​

​ UKball stopped the fight and ​

​ Boliviaball due to the internal conflicts.

​ Liga del Interior and the ​

​ Federal Pact, and started a civil war that ended with the federals winning and Argentinaball becoming the ​

Drawing Rio de la Plataball is really easy and not difficult at all: 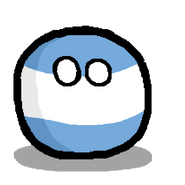 Retrieved from "https://polandball.fandom.com/wiki/United_Provinces_of_Río_de_la_Plataball?oldid=1283945"
Community content is available under CC-BY-SA unless otherwise noted.