Insular Government of the Philippinesball

Spanish Empireball
United States Philippinesball, aka US Military Government in

First Philippine Republicball, he was adopted by USAball after he won against

Spanish Empireball during the Spanish-American War of 1898. However, after some misunderstanding, he fought against his stepfather, who eventually calmed him down and thought him the ideals of freedom and democracy. He later grew up to become the

Commonwealth of the Philippinesball in 1935. 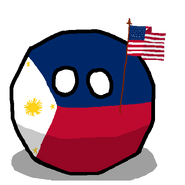 Retrieved from "https://polandball.fandom.com/wiki/United_States_Philippinesball?oldid=1250893"
Community content is available under CC-BY-SA unless otherwise noted.