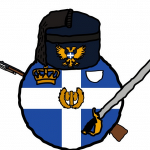 People from the Balkans (nice ones)

"Sometimes a Nation has to fight to stay great. Even if it impossible. Just because it is necessary to do it"

Hello my name is [REDACTED] and I am a Greek Nationalist (not the same as Greek Neo Nazi) who is bent on helping this Wiki grow as I am a fan of Politics, History, Nationalities and the Polandball Universe.

Either than that I am an Eastern Orthodox Christian and am currently living in Australia.

Thanks Kenshi2900mapping for creating my userball icon!!!

FLAH!2.0: My best friend. I like listening to his political views as he makes very good points and is pretty interesting to listen to. He also was responsible for creating my profile picture that I used to wear (sorry....).

Kenshi2900mapping: A good friend of mine. He created my userball icon and is generally a nice person.

XxBertholdtxX: A Romanian Turk. He is a very good and well spoken person. I may disagree with him in a few points but he is not a radical Ottoman Turk and thus I respect him for that.

EthantheArmo2002: A very kind hearted Armenian. The first person to ever want to be my friend. God be with you always!!

Graviolania: A good conservative friend of mine. He seems to understand the consequences of non assimilation and immigration considering his view points. God speed!!!

ChetniksBall: You seem like a good nationalist chap. Just try and drift away from arguments and you will be sure to be on your way to greatness.

0RedEye: Mediterranean brother. He has similar view points as me and is very respectable

LumiNyteGT: An Armenian Turk. Whilst I may not see eye to eye with his views (especially in the Cyprus dispute) I do believe he conducts himself well as he raises valid arguments.

LCPLOwen: A good Russian American comrade! I admire his conservative view points and kind demeanour towards others.

XerosPlex: Very intelligent and polite Leftist! I enjoy the political conversations that I have with this individual. Take care!

My opinions of People of the World

The ones I admire

Ioannis Metaxas: He is my favorite politician and Greek PM of all time. I love his ideology and what he had done for the Greek state. ΖΗΤΏ Ο ΜΕΤΑΞΆΣ

Francisco Franco Bahamonde: Another leader I look up to with a similar ideology as Metaxas. I especially liked his efforts in the Spanish Civil War to expel the Communists and Anarchists from the Spanish government and nation.

Άγιος Χαράλαμπος: My patron saint. He did a lot for the Christian Faith.

Antonio de Oliveira Salazar: Another leader I like in terms of politics. He might not be god status as compared to Metaxas and Franco but still has a pretty good leader.

George II of Greece: The best monarch of Greece. Not only did he defy the Nazis in WWII but he also beat back the traitorous KKE during the Greek Civil War.

Georgios Papadopoulos: He was one of the best leaders of Greece as he revived the Metaxas dream in Greece through the Military Junta. My only problem with him was that he was basically the result of US Imperialism and that his reign was short-lived. Still, I abide by his motto of "religion, family and above all, Greece (or the country)" as, in my opinion, these are the things that make a country great.

Victor Emmanuel II and III: The first one unified all of Italy and united the Italian people and Italian nationality. The second one made Italy into a Colonial power by invading Libya and Ethiopia (technically). Whilst I don't support Imperialism, I do think that the two of them revolutionized what it means to be Italian.

Tsar Alexander II: One of the best Russian Tsars. He made good reforms and helped Balkan countries achieve their eventual independence.

Viktor Orban: You have every right to control your own borders and to keep the Hungarian National Identity intact. God speed!

Vladimir Putin: Either than him being autocratic, I believe he will do great things for the Russian people (just dont remake the Soviet Union).

Mahatma Gandhi: He was a very peaceful person and did the most extraordinary thing of kicking out the British without violence. pls dont nuke me...

Georgios Grivas: The father of Enosis and EOKA. He is a god damn war hero. He also founded "Organisation X" which was a royalist, nationalistic resistance group against the Nazis when they occupied Greece. He has fought in both World Wars and has proven to be a true Greek patriot.

Grigoris Afxentiou: He layed down his life for his comrades when fighting the British to gain Cyprus's Independence. The hero of Cyprus.

Otto Von Bismark: Responsible for the unification of Germany. He is the reason why German nationalism shoud exist. It's a shame not many people think too much about him though.

Emperor Meiji: He modernized Japan and made it into a powerhouse of a nation. Japanese nationalism started with him. I wish Japan continued down this path until it became nazi.

Peter I of Serbia: Fought against the Turks during the Balkan Wars and the Ottoman Empire and Bulgaria during WWI.

The Mavromichalis Clan: A family who aided in the fight of the Greek War of Independence in the Mani peninsular. I believe these people are my relatives or ancestors or something like that.

Sun Yat-Sen: The creator of the Chinese Republic, The Kuomingtang Political Party, and Chinese Nationalism. His vision of a China should've succeeded as it would've been the best thing for the Chinese people (in my opinion). I support his three policies of nationalism, democracy and the livelihood of the people.

Chiang Kai-Shek: Whilst I don't like his autocratic tendencies, he was soooo close to destroying the Communists of China until Japan came along and fucked their shit up. Even after China was liberated, Chiang did fuck up when he refused to pull out his forces in Manchuria.

Narendra Modi: He is alright. Pakistan has been fucking over India lately mainly due to terrorist attacks. India should be nationalist in order to protect its borders and national identity.

The ones I am confused/neutral about

Draza Mihailovic: I mean, yeah the Chetniks did some fucked up things but at the end of the day he fought for the Yugoslav Kingdom against the Communist Partisans. I like him for his nationalistic pride but I just wish he hadn't committed the massacres he did.

Benito Mussolini: His ideology is shitty, to say the least as it focuses on Imperialistic tendencies. His Irridentist philosophy is what I follow as he wanted to unite all Italian peoples under his nation but he took it too far and invaded areas that are not Italian. He is also a meme lord due to his failures.

Mustafa Kemal Ataturk: He's a questionable fellow. He attempted to modernize and westernize Turkey and also attempted make peace with Greece. Whilst I might not 100% agree with his ideology and do not like his involvement in the various genocides committed against Greeks, he seemed to want to move past the rivalry both Greece and Turkey have had to endure

Eleutherios Venezeilos: Whilst I like his Irridentist views and him pursuing the Megali Idea, his ideology has gone to discredit traditional institutions (such as the Church and King) and has turned into some sort of Centre - Centre Left ideology. Still I would've liked to see the Megali Idea fufilled (back in those times... the Greeks that used to live there are either dead or the minority).

Theodore Hertzl: Well he is kind of right....Everywhere the Jews have been, they have failed to integrate or assimilate into society. And so the solution should be a state run by the Jewish people themselves. I am however against the way they achieved this goal by massacring Palestinians in the process (not saying the Palestinians are blameless but still).

Radovan Karadzic: I believe Srpska should be Serbian but the way he handled the Yugoslav Wars was that of brutality and ruthlessness. I don't hate him but the things he did are nothing to be proud of.

Ratko Mladic: Same thing applies to you but you were actually the one orchestrating the attacks against Civilians and the UN.

Aslan Maskhadov: I don't support Chechen Independence one bit, but it is hard to not give this guy credit for attempting to secularise Chechnya in order to maintain it's independence. But alas he lost control and the warlords and terrorists of Chechnya screwed everything over. I respect him.

Ayatollah Ruhollah Khomeini: I am a Theocrat myself and so I like this guy. However, he seems to be too extreme for my liking and will do anything to destroy the west (but to be fair, the previous guy was a tyrannical ruler who was supported by the USA).

Gamal Abdel Nasser: He is a good man by all accounts and his ability to break away from British Imperialism is astonishing. In terms of his political viewpoints and shaky ground with Israel is where I get confused (HOW ARE YOU BOTH A NATIONALIST AND A SOCIALIST????? a̶r̶e̶ ̶y̶o̶u̶ ̶a̶ ̶n̶a̶z̶i̶?̶)

Muammar Gaddafi: You are the weirdest person to ever grace this Earth.

Giovanni Gentile: You are the creator of Fascism, but your definition of what Fascism is supposed to be is weird. Where are the Nationalism and the Irridentism in your philosophy? Benito Mussolini was thought to have created Fascism through you but your ideology is weird.

I will continue this later

Opinions of other Countries

The ones I despise

Pages I have created

Gallery (AKA My Fridge where I hang drawings from!)

Retrieved from "https://polandball.fandom.com/wiki/User:4th_of_Augustball?oldid=1144973"
Community content is available under CC-BY-SA unless otherwise noted.