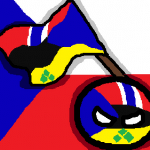 Less than a Week

Less than a Day

How did Piscesall go to North Korea

Actually, I think that "How did Piscesall get back from North Korea without being imprisoned" is a more interesting question.

Hi, I am Bresbeba, content moderator of this wiki.

I started with polandballs at the end of 2014. In April 2015 I found this wiki. Near start of July, I wanted to be a contributor here, and no only see others' work. Maybe I started to want to it when I saw some about users and wars on some very ugly wiki today, but forget about it. On 4th August, I created an account and week after it I did my first contribution - on page Českoball on Czech version of this wiki i fixed some bugs. My first contribution on English version was on page Georgiaball - I added second börk. In April 2016, i started to make lot of new pages. Today (26th September 2017), I am content moderator of this wiki and with 3 040 points I am 12th on leaderboard.

I live in Kolín, Central Bohemia district, Czech Republic. I like Geography, History, national anthems and foreign languages (my favourite is Japanese). I am winner of Czech Geography olympics 2016. I have 14 polandball plushies and 7 polandball T-shirts.

Currently I am recreating the second-level administrative divisions of the

Republic of Estonia because of the 2017 administrative reform.

Retrieved from "https://polandball.fandom.com/wiki/User:Bresbeba?oldid=953409"
Community content is available under CC-BY-SA unless otherwise noted.