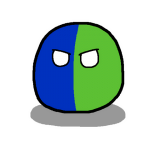 American (Though if things came to where the government was starting to slide then I will relieve myself of those bonds.)

Not a religion, but I'm an atheist.

(Also known as something Polandball can't do.)

Note: I got my name from the video game Overlord.

Here are my official color values if anyone wants to make me a profileball or use me in blog, wall, comment, etc.

Reach Top 50 on the Wiki

Become an Admin or Mod

Social Media and other things

Current Song:A Knight's Epic by myself. You can check it out on Soundcloud. I'll be eventually be releasing it as part of my indie game soundtrack on Bandcamp.com

Retrieved from "https://polandball.fandom.com/wiki/User:MinionMasterAF?oldid=302484"
Community content is available under CC-BY-SA unless otherwise noted.