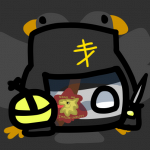 Quite creative and artistic

Nor good or bad:

they/them but he/him works too

You probably should've figured that out by now

i'm actually not albertan, but i'd rather be there than here

None as of now

They showed up in my basement. I have no idea how they got there.

The Russian Empire! God save the Tsar!

(countries that) TGC (has visited)

USA (i used to live there)

Less than a Week

Less than a Day

Spain (both were waiting for flight transfers)

Hey, how's it going! I'm formally TGC. ...As long as you're here, I guess I'll talk about myself, eh? I'm Scottish and German (granted, you may have guessed that) and I like drawing stuff. All of the images on my profile are mostly chronological to show no bias.

If you want to see my art, click here!

Bacteriophages are cool as heck

Stuff you should probably know

I probably won't accept your friend request if you have nothing on my profile that I can use to learn more about you as a person.

I can tolerate authlefts if they're not up in my face about it. If you're authleft and reading this, please don't bring up anything about East Germany. Understood?

I'm kinda lost in a time I never lived in. Specifically, Prussia during its height. though i have prussian blood so...

I can be nationalistic over Scotland.

Why am I here?

I have no idea! I contribute to grammar sometimes, making it neater, somewhat!

Have a good day!

Political stuff about me + opinions (more in-depth than my infobox)

If I had to choose, I'm a monarchist. Wow! Though I have a few apolitical tendencies so like... label me as monarchist or capitalist/apolitical and I'd agree. It's a mix between "Who cares?" and "honestly monarchy is cool."  I hate authleftism though. https://polandball.fandom.com/wiki/User:TheGermanicCanadian/Country_Opinions

- Independent, if it were not independent it would be part of Albania.

- Both independent lads, however, Israel's claim of independence is slightly more legit. You both suck.

- Honestly should be independent. Saying this from a nationalistic perspective. Saor Alba!

- If it wants to be Armenian, it can.

- I really don't care about you two, do whatever. Russia's probably using you for extra land. Be careful, m'kay?

it's actually ukrainian but who cares

Anything Spanish - I don't care, do whatever. Catalonia should be given higher autonomy and Basque isn't real.

- I don't have any issues with it as a whole, I just feel like it would be better off split. It's already becoming slowly less internally stable. Saor Alba! Aye, Ye'r mingin'. Gang die.

- If the UK splits, it should join Ireland.

Anything Canadian - Go on and get. Please, you're better than this. Specifically you, Wexit.

- British. Those Argentine claimers have no reason to own it. In fact, the population doesn't want to be Argentine.

- You're both Romanian, aha. Go on, declare it already.

- Either Taiwanese or British. The reason I think this is that since Qing fell, the treaty the Brits had with Qing would technically become invalid, as Qing no longer exists. Even if the treaty still lasted, the Republic of China never officially fell, making it Taiwanese.

amigos (but actually this time)

All of this is ever since I became TGC, mostly. Chronological, too.

Not Funny - She's a member of the Bro Code. Quite nice of a person, and a brilliant artist. Es lebe Kolumbien! but you aren't funny apparently so uhhhh...

Switz - Fellow founding member of the Bro Code. We talk fairly often. I suspect you're going to kill me someday though. But for now, we're good buds.

a nerd Byz - Amico Italiano who is part of

Nash - VERY cool countryball, mate. He's from a country that supposedly doesn't exist. But he certainly does. If he happens to kill me as well, that's gonna be bad

KiK - wait you're not Kosovar? oh well. welcome to the bro code, you cabbage

Ivih - Argentine friend, part of EYEPATCH GXNG! I have absolutely NO idea what to put here :D

Avryl - Xe's epic, if I do say so myself. Fellow Bro Coder and mod.

Rest of the honourary nerds

CSP/Ryan - Very good amigo! We both tell jokes the other person doesn't get in our conversations. Filipino who doesn't have too much Pinoy Pride.

Caio11112 - Helped on the search for why the fuck MMG was like that and is the reason I'm a Cuban General? And a member of the Ivorian Republica- ...Where are you getting this from? Good amigo though.

Romketa - Amigo who I disagree with politically. Of course, I respect his viewpoint but dear gosh please don't turn out to just be almost exactly like MMG.

Shan - editing rival and เพื่อนไท! (apologies if I butchered that) We both edit a bit too much and etc etc. Really cool guy.

Key Lime Pie - He's chill. please help i'm locked in his basement this is my only means of escape. Fellow monarchist but i recognize Kosovo, which is epic.

ChineseSocialist - He's a tankie, yes, however politics aside he's quite a nice guy. You do you, amigo.

XerosPlex - We talk politics quite a lot. He brings up quite a few good points.

Zargh - The Zargh Algeria man. I disagree with him politically however he's a nice guy and we talk politics a fair amount.

Floor - I'm running out of ideas to put here lmao but he's a cool fella ja.

Gallery of other people's art of me

Yugoslav was a half-joke

yes I don't like Canada, I want to head back to Germany

Retrieved from "https://polandball.fandom.com/wiki/User:TheGermanicCanadian?oldid=1224606"
Community content is available under CC-BY-SA unless otherwise noted.