But I'm Going to do it here not Discord, But anywho lets get into it....

What Is the Situation

So on August of 2016, A User by the name of Ditto Duck Pengiun put a Protection Lock on the Userbox Icons for

Now here's the biggest problem here, so yesterday somewhere atfer 8:30am (Australian Time) I Reported on the situation in #wikia like how all PBW Reports are reported these days, and for about 15 hours i was having the fight of my life trying to get everyone's attention to the subject, and no one seem to care about the fact that 2 icons have a Protection Lock on them that was suppose to expire 4 years ago, no matter how much i tried to gain viewer attention so i gave up. 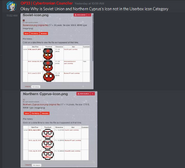 so what's the big issue here

The Issue here is that Information Should never be ignored like that, Especially Mods and Admins, it apples to every user and, I'm very disappoint in everyone that was on the server during the 15 hours that i took to get this information through to all of you, and yet you all just push it aside, and that is never a alright thing to do, especially when someone has reported something that was very important to look at..

So Yeah this is the last time i'm reporting on the

Northern Cyprus Dabarkle, and hopefully Everyone has learnt a lesson in all of this, so that's a rap, Till All Are One Everyone

OptimusPrime33 (aka The Anti-Lemon Hunter 🍋)