A couple thousand years ago, a country you've probably heard of called

SPQRball conquered his way through the Italian boot, subjugating the local Celtic and Italic tribes living in the Venetian lagoon. As time marched on and

SPQRball did his thing where he exploded in twain, the Venetian lagoon was in a troubled situation. To his north were the

Germanic tribes that waltzed their way to Rome and sacked it, and to his east was

Byzantine Empireball who wanted precious Rome back. All of Italy was retaken by

Byzantium as a result.

Where does our hero Venetoball fit into this? Glad you asked! The folks living in soon-to-be Venetoball wanted to be separate from

Byzantium, so they asked politely and Byzantium obliged.

Veniceball was an independent republic, and they made BANK!

was getting super rich off of everyone who asked - (and I mean everyone - but all glories come to an end at some point.

Napoleon came strolling about being Napoleon and conquering everything, and saw that Venice was a pretty nice target. So he took it. Now our serene republic is no more, but 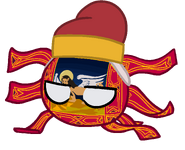 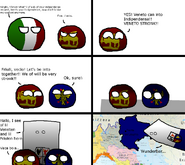 Retrieved from "https://polandball.fandom.com/wiki/Venetoball?oldid=1273801"
Community content is available under CC-BY-SA unless otherwise noted.