Governorship under a democratic Presidential Republic

CAPITALIST PIGS WHO USE THE WORKERS

USAball located in the northeastern part of the country. His capital is Montpelierball and largest city is Burlingtonball. His eastern neighbor and brother is New Hampshireball, western is New Yorkball, Massachusettsball to his south, and his cousin Quebecball to the north. with a population of 623,651 people it is the second Least populated US State only behind

3ball adopted by the

British Empire and the

Kingdom of Franceball, and then became part of

USAball. He was admitted to the Union and became a state in 1791. Vermontball is mostly known today for being the home of former 2016 and 2020

USAball Democratic Presidential candidate Bernie Sanders, who has been his main Senator since 2007. Vermontball has a lot of maple syrup just like

Like almost every US state, Vermontball is only a seal on a blue background: 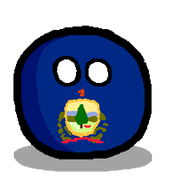 Retrieved from "https://polandball.fandom.com/wiki/Vermontball?oldid=1294852"
Community content is available under CC-BY-SA unless otherwise noted.