Sassy, and a hipster

Sydney, everything about sydney... did i mention sydney???

Dim Sims
Victoriaball is a state of

Victoriaball was born as a 5ball, adopted by

He was a part of New South Walesball's clay until 1851.

Victoriaball is based on the British Blue Ensign. 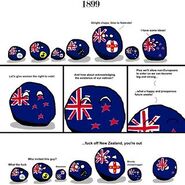 Retrieved from "https://polandball.fandom.com/wiki/Victoriaball_(Australia)?oldid=1182817"
Community content is available under CC-BY-SA unless otherwise noted.