My nephew or something

Tried to occupy me twice but never succeeded

Melbourne getting mad because i took his place of most livable city, Wiener Linien, Kommissar Rex

11/2/2020 (Terrorist attack in Vienna) Ottoman Empireball trying to invade him, anyone who steals his name (just like Australiaball steals Austriaball's name)

Alive, recently a terrorist attack happened in his 1st district

Secret weapon if the Turks return

Austriaball, and since 2018, he can into most livable cityball. He likes his sausage stands, or as he calls them, Würstel/Wiaschtlständ and putting signs that remind people to put their dog's feces in a plastic bag everywhere. Vienna is home to many famous componists and there is also that little thing called First Viennese School, or Wiener Klassik. Viennaball consits of 23 City districts and 89 cadastral communities

Viennaball has also had some of the most influential battles in the history of Europe on his clay.

Viennaball was officially born as a

Romans around 100 AD, firstly mentinoed in 881 as apud Weniam and later adopted by

Ottomans tried to invade Viennaball, but failed both times.

In 1804, Viennaball became the capital of

During the Second World War, Viennaball was bombed many times which caused the destruction of some important Viennese buildings.

After World War II, Viennaball was split up into 4 sectors: The

American occupation Zone and the

French occupation Zone. In 1955, the Austrian State Treaty was signed in Viennaball, which turned Austriaball into a free countryball again. 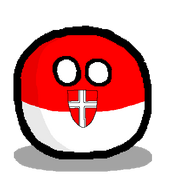 Retrieved from "https://polandball.fandom.com/wiki/Viennaball?oldid=1292527"
Community content is available under CC-BY-SA unless otherwise noted.