English (about 40% of his population CAN speak it)

Triều Tiên (sometimes, or once)

Ma-rốc He hates me for supporting Western Saharaball. Also. ANOTHER FLAG STEALER!!!

Guy who thinks he's stronger than me (Formerly/now: rarely)

Israelcube, the last named Nguyen, Doraemon, Anime, Motorcycles, Capitalism (as 95% of my people do), Wolfoo (Created by Vietnamese in

Fighting back Corona virus as hard as possible

Vietnamball, officially the Socialist Republic of R I C E Vietnamball, is the RICEFIELDS MADAFAKA! easternmost countryball on the Indochina peninsula in

Chinaball to the north,

Malaysiaball across the South China Sea to the south-east, and

Philippinesball to the east. His capital city has been

Hanoiball, and his largest city is

Vietnamball Hides in the tree is one of the world's five remaining one-party socialist states officially espousing communism. Although Vietnamball remains officially committed to socialism as his defining creed, his economic policies have grown increasingly capitalist,[216][217] with The Economist characterising his leadership as "ardently capitalist communists". He is sometimes referred to as a "liberal communist". He thinks of himself as a poor country and

Japanball and Westerners are rich countries. Even so, he is one of the fastest economic growth countries in the

world. He is also notable for being one of the most

atheist states in the

World, although he has his own folk religion, that he hates to admit it as a religion. He is also one of the most Anti-Chinese countryballs on Earth.

Vietnamball believes he has noble blood in his veins, by the mother Âu Cơ, a fairy and the father Lạc Long Quân, a dragonlord, make him stronger than all countryballs who dare fight him!

Also, Vietnamball once drew the attention of the world for his victory over Franceball at Dien Bien Phu in 1954, which encouraged the revolution of 17 African colonies of France and became a "big meme source" by force US must "leave his own war". And lastly, Vietnamball is very good at using tanks, so he usually win the tank competition .

His national day is September 2nd.

Vietnamball, is a very strong nationalist countryball. Unlike other communist countryballs, he is very open to the world and is very good friends with

USAball. Although Vietnamball is (kinda) authoritarian, He is very proud of himself after an economic boom in the late 20th-century. He is very happy and never does anything against

USAball. When alert, he is aggressive. He also loves BEAUTIFUL nature, forests and sea. Transparency International's 2017 Corruption Perception Index ranks him 107th place out of 180 countries, making him sort-of the least corrupt communist countryball in the world.

Vietnamball used to be friends with

Chinaball during the North Vietnamese era. However, after the Vietnamese reunification, they start to have hostile relations again. China launched an offensive invasion due to Vietnamball's occupation of

Cambodiaball after the Khmer Rouge ended. This is why Vietnamball, to this day, he still hates

Citizens of Vietnamball celebrates Lunar New Year. Vietnamball is the home of 54 different ethnic groups and cultures, and the ethnic Vietnamese (Kinhs) are dominant among them.

Văn Lang and ruled by the Hùng kings. The Hùng kings were first mentioned in a 4th-century Xianbeiball Northern Wei dynastyball's historiography book Commentary on the Water Classic, while the Lạc Việt or Luoyue people in northern Vietnam (direct ancestors of the modern ethnic Vietnamese) was mentioned in a old inscription on a bronze caster of Shang ball, dated 3200 years ago. At that time,

Van Lang had Southeast Asian culture and an Abugida script.

However, the state of Âu Lạc didn't last long and later it became part of the new powerful Yue kingdom

Nam Việt. Since then,

ancient Vietnamese has lost its Southeast Asian culture and writing. The Kingdom of Nam Việt extended into central Vietnam to the south, to Changsha of the Han dynasty to the North. The kingdom had trade and contact with

Evil Hanball conquered Nam Việt and incorporated it into Imperial Chinaball rule for over a millennium until 880 AD. Under Chinese rule, the patriotism and nationalism of Vietnamese people led to many rebellions which resulted in several short-lived independent Vietnamese states. Around 9th century, when the Tangball empire of Chinaball began its shrinking, the Vietnamese people thrived up against the Chinese rulers for their freedom and finally resulted at 905 when the first time Vietnamese chieftains now rule their own state independently since the Tang domination.

Vietnamese monarchy was finally formed in 939 after the battle of Bạch Đằng river. In 968 king Dinh Bo Linh established the kingdom of Dai Vietball. Successive Vietnamese royal dynasties flourished as the nation expanded geographically and politically into Southeast Asia. In 1407, Mingball invaded and turned Vietnam into a province, but Le Loi defeated the Ming and reestablished Dai Vietball. During the reign of king Le Thanh Tong (1460-1497) of the

Lê dynasty, He became what is considered by historians such as John K. Whitmore "The Golden Age of Vietnam" (ball). During Vietnamball's golden age, He defeated and annexed the long-term rival Champaball, then turned west and attacked Tai states of Kingdom of Lan Xangball, Lannaball, Kingdom of Avaball and their ally Malacca Sultanateball. After Le Thanh Tong's death, Dai Vietball quickly weakened and teared down because of bad successors. Two devastated civil wars occurred from 1533 to 1592 and 1627 to 1672, Dai Vietball was divided into two rival polities at the 18th parallel north, the Trịnh dynastyball and Nguyen ball. Dai Vietball was never able to regain his unity and strength under a single monarch like before. Finally, after the Tây Sơn Dynastyball revolution and the following deadly civil war in the late 18th century, Dai Vietball collapsed, again and was reunified under a new state: the Vietnamese Empireball (1802-1885), or Dainamball. 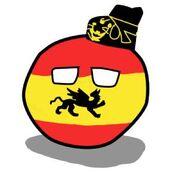 Established by Gia Long, early Dainamball had relative good relations with European balls such as

Prussiaball, and had embassies with

USAball in 1812 and 1819. Dainamball simply forced himself isolated from the rest of the world from 1820 to 1858 while persecuting Catholics.

Franceball invaded Vietnamball in 1858 in revenge of his isolation polity. In 1883 the French launched their final campaign with 60,000 troops then finally got the Vietnamese capitulation in August 1883 through the Treaty of Hue that eventually made Vietnamball became a protectorate and a colony of Franceball. In 1887 Franceball created the French Indochinaball. In 1918 Vietnamese emperor Khải Định then abolished the old Vietnamese Nom script and Chinese characters, replaced it with the Latinized-script developed in the 16th and 17th centuries that we know today.

South Vietnamballs at the 17th north parallel. The conflict between the two sides intensified in what is known as the Vietnam War. The war ended with a North Vietnamese victory in 1975. It was easy for Vietnam to win since he had the lucky PPSH-41 and guerrilla warfare.

During the Vietnam War,

Khmer Rougeball communists had formed an alliance to fight

his alliances in their respective countries. In May 1975, the newly formed

Cambodiaball. Despite their open display of cooperation with

Khmer Rougeball feared that the Vietnamese communists were scheming to form an Indochinese federation with Vietnam as the dominant force in the region, and in 1978, the

Democratic Kampucheaball began waging a war against the unified communist Vietnamball. The invasion, however, was soon repelled and resulted in the defeat of

Chinaball insulted Vietnamball in the US by saying "The little child is getting naughty, it's time He gets spanked." when he allied with the Khmer Rouge. Chinaball invaded Vietnamball again like how he invaded Tibet and East Turkestan. However, Vietnamball won against Chinaball and he retreated weeks later.

Vietnamball, unified under a Communist government, remained impoverished and politically isolated. In 1986, the government initiated a series of economic and political reforms that began Vietnam's path towards integration into the world economy. In 1995, he restored relations and currently lifted the embargo with a former enemy,

USAball. Since 2000, Vietnam's economic growth rate has been among the highest in the world.

In the 2010s, Vietnamball has been actively protesting against

Chinaball's position on the Spratly Islands. He also protested in order to avoid potential Chinese invasion because unlike other Southeast Asian countries, Vietnam has been part of China for more than 1000 years, similar to Tibet and Xinjiang.

Polandball Wiki has a gallery of artwork, comics, gifs and videos of Vietnamball.

Retrieved from "https://polandball.fandom.com/wiki/Vietnamball?oldid=1335016"
Community content is available under CC-BY-SA unless otherwise noted.