pretty, full of virginity (according to Chris Chan).

Sad about the loss of the 11 people in

Virginia is not a place for virgins.

Virginiaball is one of the states with the highest number of

Virginiaball is nicknamed the "Old Dominion" due to its status as a former dominion of the English Crown, and "Mother of Presidents" due to the most U.S. presidents (including George Washington) having been born there. The first English settlement, Jamestown (what later started the 13 colonies) is in Virginia. The

West Virginiaball. Half of Virginia loves the south (not NOVA), and was once of

Confederateball, In a rivalry with West Virginiaball for breaking away from Virginiaball during the Civil War.

The southern area is truly lovely (and has lots of battle sites), alas the northern area (Fairfax County, NOVA) which serves as a buffer zone from VA to DC.

Virginiaball ratified the Constitution on June 25, 1788 and was the tenth state to do so.

Virginiaball is currently mourning the lives lost in the August 12th, 2017 protest that suddenly became violent in Charlottesvilleball (Virginia), when white supremacists attacked counter-protesters, and one rammed many people with a car, killing one protester, and also shaming

white supremacists, for bringing violence to its protest. 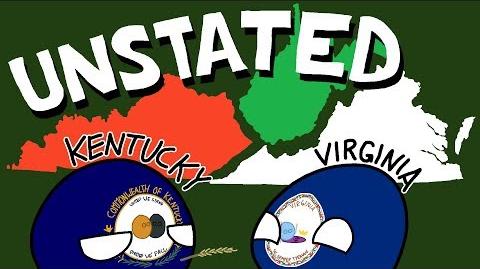 Retrieved from "https://polandball.fandom.com/wiki/Virginiaball?oldid=1029302"
Community content is available under CC-BY-SA unless otherwise noted.