TOTALLY NOT BLOOD,Vlad the Impaler

Once I impaled someone on a stick that is so high, that reached the space

Shish Kebab
Wallachiaball was a historical regionball in the Eastern Balkans. Its most important cityball was

Bucharestball, the present capital of

Romania in his childhood, youth and early adulthood life. He betrayed

kebab during the Battle of Vienna

He is considered to be very brutal and evil. Friendly looking at first, most countryballs have a surprise finding him impaling Ottomanball, but everything seems legit from his point of view.

His origins are of Daciaball and SPQRball, he was formed in 1310 by Basarab I with support from Kingdom of Hungaryball, but revolted against Kingdom of Hungaryball in 1330 and Wallachiaball became independent after the battle of Posada where 10,000 poorly armed Romanian peasants defeated 30.000 well equipped Hungarian soldiers.

He was a stronk kebab remover throughout middle ages. His most notorious ruler was Vlad the Impaler (He was Romanian born in Transylvaniaball but heir to Wallachiaball) who used to impale kebab because why not.

In Romanian, "Ai luat ţeapă" means "You've been fooled" but is translated literally into "You took a spike".

In 17th century, he came to be dominated by kebab and things started to go downhill.

In 1859, he united with Moldaviaball to form the 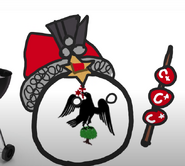 Retrieved from "https://polandball.fandom.com/wiki/Wallachiaball?oldid=1292687"
Community content is available under CC-BY-SA unless otherwise noted.