SPQRball was a powerful empire. It expanded from the easternmost sides of the middle east to modern day England. The majority of SPQR's conquests were successful, and he got larger and larger. However, this didn't mean that there would be no resistance from within, nor would it mean that nobody from outside the empire would try and take over. While he had more success in purging rebellions, he didn't have the most luck in stopping invasions. So, in order to take care of the invaders,

SPQRball made the choice to split the empire into 2 sides, east and west. Each side took care of enemies in their area.

Eastern Roman Empireball took care of the invading Persians, Slavs (later), arabs, turks and more. Meanwhile, the Western Roman empire had to defend from invading Germanic tribes, arabs, and Huns. Sadly, things did not go well for the West. This was not based off of the fact that the west had less of an advantage than the east, but rather it was the decisions that the western government made that ended him sooner. One grave mistake he made was that many Romans in the population could avoid military conscription. This would result in him lacking the proper amount of Romans needed to fight invaders and rebels. This was not the only mistake, as even if he decided to conscript more Romans, his troops were poorly armed, with many not having proper armor to survive against the Germanics and huns. This woud mean that his troops would get killed easily in battle. Economically, the west was also in bad shape, since the west decided it would be a good idea to make more money (that meant mining for more metal to make their coins). The problem is, when you introduce more money into the economy, that does not make you richer, it only makes the value of the money go down. So, the value of the roman currency went down and that further destroyed the economy in the west. The lack of troops meant that towards the end of the empire in the west, the romans had to hire germanic mercenaries to protect the land they had left from invaders. Eventually his misery was put to an end. But his brother

Eastern Roman Empireball made it through and later made it his job to reconquer all the land that used to belong to the west. He managed to get some land back but then he faced problems and died eventually. 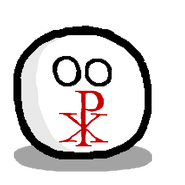 Retrieved from "https://polandball.fandom.com/wiki/Western_Roman_Empireball?oldid=1282678"
Community content is available under CC-BY-SA unless otherwise noted.