Best Friend he lets me station my government too

We need to get recognized together

GET OUT OF MY CLAY

GIVE FREEDOM TO ISSAQ CLAN!!

GET OUT OF HERE YOU TERRORIST!!!

WHY YOU WITHDREW RECOGNITION??!

Western Saharaball (also known as Sahrawi Arab Democratic Republic, SADR, or الجمهورية العربية الصحراوية الديمقراطية by his friends,) is an independent country a disputed territory in the

Moroccan country of northern Africa. Nearly three-eighths of the world's countries recognize this fellow, though

UNball still considers him as part of

Algeriaball is his friend because he lets him station his government and army there.

The earliest known inhabitants of the Western Saharaball were the

Berber people of the Gaetulian tribes. Depending on the century, Roman-era sources describe the area as inhabited by Gaetulian Autololes or the Gaetulian Daradae tribes. Berber heritage is still evident from regional and place-name toponymy, as well as from tribal names. 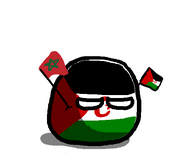 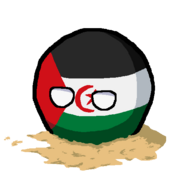 Retrieved from "https://polandball.fandom.com/wiki/Western_Saharaball?oldid=1264980"
Community content is available under CC-BY-SA unless otherwise noted.