Gulf of Finland islands, Karelian Isthmus, Ladoga Karelia, Salla, and Rybachy Peninsula, and lease of Hanko given to the Soviet Union
The Winter War was a military conflict between

Estonia. The invasion failed horribly however, as the

Soviet Union suffered 3x as many casualties as the

Finns. The end result was an exchange of territory where Finland gave up 12% of its land to the

Soviets suffered a severely embarrassing moment in their history.

Until the 19th century, the area what became present-day

Finland was a patchwork of two ethnic groups, the finns and the samis, under the control of the

Swedish Empire. In 1809, the Russian empire conquered the area, and converted it into an autonomous buffer state. While the area enjoyed wide autonomy, Russia then began to strengthen the central government, and unify the empire through russification. These attempts ruined Russia's relationship with the Finns, and increased

The outbreak of World War 1 gave the

USSR began to claim parts of

Finland's clay, in order to create a buffer against a German attack, as the border was close to Leningradball (now St. Petersburgball). The

Soviets tried to negotiate with

Finland, to give up his Karelian Isthmus territory in exchange for other land. When

Finland denied the offer, the

Soviet's Red Army pushed back against

Finland's small reserve army through the first months of the conflict. Though the

Finland and had superiority with tanks and planes, he had difficulty in

Finland however, had a well led army, knew the terrain well, and had warm, snow white camoflage suits. Therefore, while he was vastly outnumbered, he was able to hold off against the

Soviets for a long time.

After months of fighting,

Finland began to get tired. The

Soviet forces began to recieve fresh reinforcements, and his military was once again overrun. With no chance of help from the Western Allies,

Finland was forced to beg for peace and give some territories to Soviets.

The Treaty of Moscow was signed in 1940. The treaty forced

USSR, including its second largest city, Viipuri (Vyborg). The League of Nations saw this invasion as illegal, and expelled the

Soviet Union on December 14, 1939. The Gulf of Finland islands, Karelian Isthmus, Ladoga Karelia, Salla, and Rybachy Peninsula, and lease of Hanko were given to the Soviet Union, but their reputation was damaged by how bad they performed, especially weak army leadership, and this was exploited by

Nazi Germany in Operation Barbarossa in 1941 where

Finland participated in to reclaim lost land in the Continuation War. 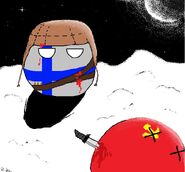 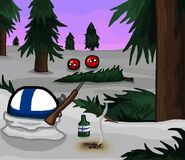 Retrieved from "https://polandball.fandom.com/wiki/Winter_War?oldid=1248187"
Community content is available under CC-BY-SA unless otherwise noted.