My version of Mexico

3ball, then was adopted by USAball. He officially became a state in 1848.

Like almost every US state, Wisconsinball is only a coat of arms on a blue background: 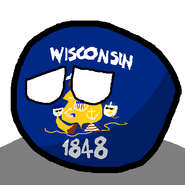 Wisconsin
Add a photo to this gallery

Retrieved from "https://polandball.fandom.com/wiki/Wisconsinball?oldid=1297838"
Community content is available under CC-BY-SA unless otherwise noted.