World War II was a global war between the

Allied Powers and the

Axis powers that spanned between 1939 and 1945. The majority of countryballs eventually split between 2 alliances - the

Axis Powers and the

Allied powers. The conflict was the deadliest in history and saw the advent of the first (and only) use of nuclear weapons in war.

The war also coincided with the Holocaust, the most extensive in systematic genocide in history, in which up to 11 - 15 million people were exterminated throughout the

German Reich, up to 6 million of which were

Germanyball (Weimar Republicball at the time) was humiliated by the

Allied powers of the War, who forced him to sign the Treaty of Versailles in 1919, which took away some of his clay, and also limited his power.

Franceball invading part of his clay in 1923 after he tried to postpone his reparations, but eventually got back on his feet, and joined the

USAball experienced a stock market crash, which affected all of his indebted, including

Germanyball, who quickly lost all his money. As a result of his poverty, the unstable Germany, was turned into

Nazi Germanyball in 1933 and re-anschlussed his demilitarized clay, known as the Saar, in 1935, then the Rhineland in 1936.

Fascist in 1922 and had invaded

Japanball invaded Manchuball, one of

Chinaball's sons, and took his clay in 1931, renaming him

Chinaball recovered from his split personality disorder in the 1930s, Japanball took advantage of him still being ill and kidnapped then raped him in 1937.

USAball responded by stopping trade with

Basqueball in the Spanish Civil War. In 1938

Austriaball and it's clay, and did the same to

Nazi Germanyball in Munichball, part of his clay to sign an agreement, in which

Nazi Germanyball agreed to stop expanding his clay. However, when he broke the agreement in September 1939 by invading Polandball's clay, under a secret non-aggression pact with

Nazi Germanyball, after he refused to withdraw from

Around this time, fellow fascist ball

anschlussed the clay of name

Netherlandsball, then raped Franceball in May 1940, creating a puppet state,

Franceball's clay, since she had fled to

Nazi Germanyball then tried to bomb

UKball's clay but was ultimately defeated and forced to withdraw from it.

Finlandball for breathing room for ​

​ Saint Petersburgball , and although he won, He had lots more casualties than his enemy, so he invaded

Nazi Germanyball to wonder if

Soviet Unionball was really that stronk after all. In 1941,

Greeceball's clay, with some help from

Bulgariaball decided to ally with

Nazi Germanyball, in hopes of not being invaded by him.

Nazi Germanyball then decided to invade

UKball had invaded pahlavi Iranball, since it had joined axis as well.

Back in East Asia,

Japanball had invaded and raped

Thailandball to ally with him. In December 1941, he bombed

USAball's Hawaiian clay, causing him to declare war on

Philippinesball. By 1942, he decided to bomb

Darwinball and he had also kidnapped

USAball won a decisive victory on

Japanball's clay at Midway Island in 1942, then bombed

Japanball's clay, before taking the

British Maltaball's clay, but since this is really rather irrelevant we will move on. On the New Year's Day of 1942,

Central America, and some countryballs joined with the allies, forming an alliance called "United Nations" to defeat the fascist countryballs, and began to spread across the world. Meanwhile,

USAball helped the British army in North Africa, to defend

Kingdom of Italyball's southern clay, and

Nazi Germanyball had invaded most of

Lithuanian SSRball, with his new ally

Finlandball, but was bogged down in the winter of 1942-43 by the winter and

Sovietball's military tactics. He was forced to retreat, and was defeated at Kursk and Stalingrad on

Nazi Germanyball was on the retreat.

British Tringapore, and his real sons

Empire of Japanball out of

USAball landed in his son

Philippinesball's clay in 1943, and started fighting with

Empire of Japanball to liberate him.

Bulgariaball abandoning him in favour of the Allies.

USAball pushed up Italyball's clay, but Nazi Germanyball took the rest of it before USAball could liberate it, and he created

USAball had liberated most of

Kingdom of Italyball's clay and

Philippinesball's clay in the Battle of Manila, and

Kingdom of Yugoslaviaball's clay, and defeated

evil son at Monte Cassino in 1944, causing Vichy Franceball to surrender to the Allies (family tradition?). In June 1944, UKball, and his sons

It's important to note that in 1943 and 1944, there were 2 uprisings happening in Poland. The 1943 one is known as the Warsaw Ghetto Uprising where Polish Jews rose up against the Nazis who were going to transport the remaining ghetto population to Majdanek and Treblinka concentration camps.

Polish Underground Stateball hoped to liberate Warsaw before the Soviets arrived. The Warsaw uprising was the single largest military operation carried out by any European Resistance group in World War 2.

Meanwhile, in the Pacific,

Empire of Japanball's clay, including Iwo Jima, and Okinawa, while

Republic of Chinaball kick out Japanball from his clay, along with

Sovietball. By January 1945, USAball had secured the Pacific islands' clay, and Chinaball was heading north.

Manchukuoball surrendered, while USAball finished up work on a special weapon to be used on either

Nazi Germanyball had retreated from the Ardennes, and

Netherlandsball had been liberated, the last one by

Monacoball's clay had been liberated by

Kingdom of Hungaryball, a newly liberated

Polandball, and a newly freed

UKball and USAball joined him soon afterwards, and Nazi Germanyball was mortally wounded in late April, and committed suicide on the 8th of May, 1945, ending the war in Europe. His children

ReichRawr (aka the Saar) was adopted by

Denmarkball became free once again after Nazi Germanyball's death in May 1945.

Empire of Japanball withdrew from

Koreaball's clay, and considered surrendering when

Sovietball declared war on him, but hesitated to do so until

USAball dropped two nukes on his clay, causing him to surrender in August 1945, ending the war altogether. Sovietball and USAball both adopted the dying Koreaball's children,

South Koreaball, while Japanball was given free therapy by

Sovietball exerted his control over his newly liberated territories.

UNball was also created to help prevent another World War from happening ever again (hopefully), while the League of Nations was disbanded.

After the War, both

USSRball was recognized like the only 2 Super Powers in the world by other countryballs. All in all,

USSRball had the most casualties with over 27,000,000 deaths, the closest to him was

Nazi Germanyball with 7,000,000(most of those were Soviet kills) 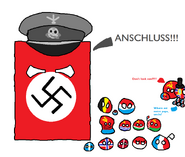 The European Theatre in a nutshell.

The Good, The Bad and The Ugly